How Early Can You Determine The Gender Of Your Baby? 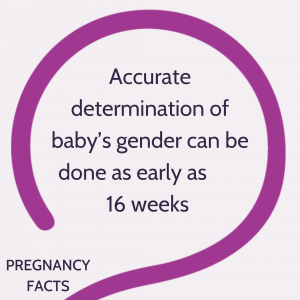 When Do I Find Out The Gender Of My Baby?

The accurate determination of the baby’s gender can start at 16 weeks of pregnancy. At this time, the sonographer can see whether you are expecting a boy or a girl using ultrasound techniques. And while ultrasound is more accurate the bigger the baby is, a prenatal genetic screening test, called chorionic villus sampling (CVS) can be carried out as early as 11-13 weeks of pregnancy, and provide reasonably accurate gender determination, among other things. However, not everyone in Canada gets the CVS testing done by default, and in most cases, the only way to find out the gender is to wait for your anatomy ultrasound, which is ordered by your doctor around 18-20 weeks. And even then, there are cases when the sonographers at those scans could not tell the gender or got it wrong.

Here at A Date With Baby, we don’t need to wait for the doctor’s requisition and can provide accurate results as early as 16 weeks.

How Can You Find Out Your Baby’s Sex?

When it comes to determining your baby’s gender, there are many ways to get the results, all with varying success rates and very different in their nature. So if you want to know the gender ahead of time, your doctor may order either one of many genetic screening tests or an ultrasound, depending on your health risks and stage of pregnancy.

While all of these tests are valid, not all of them are appropriate for everyone. Some of them are quite harmful. Finding out your sex is a secondary advantage for most of the tests mentioned since the test is looking for other information. From the earliest possibilities, the following are potential methods to discover your baby’s sex.

Sex Selection In In Vitro Fertilisation

If you’re considering in vitro fertilization (IVF), you may select the gender of your baby as part of the process. IVF is a reproductive treatment that involves uniting a mature egg with sperm outside of the body. This results in the formation of an embryo, which is subsequently placed in the uterus.

You may have the sex of various embryos determined and then only transfer the embryos of your chosen sex if you so choose. If having a baby of a certain gender is essential to you, this may be a possibility.

In combination with IVF, sex selection is almost 100 percent correct. However, if you transfer more than one embryo to the uterus, you run the possibility of multiple births.

A non-invasive prenatal test (NIPT) looks for chromosomal abnormalities such as Down syndrome during pregnancy. This test is available beginning at 10 weeks of pregnancy. It can’t tell whether there is a chromosomal problem. It’s only a check to see if there’s a chance.

Your doctor may request further testing to identify Down syndrome and other chromosomal abnormalities if your baby’s findings are abnormal.

You’ll provide a blood sample for this test, which will be submitted to a lab to be tested for the presence of fetal DNA related to chromosomal abnormalities. This test may also correctly identify your baby’s gender. Let your doctor know if you don’t want to know before the testing starts and if it is offered or covered by your insurance.

If you’re at high risk of having a baby with a chromosomal issue, you’ll require the NIPT. If you’ve previously given birth to a baby with a birth defect, or if you’ll be above the age of 35 at the time of delivery, this may be the case. Giving a blood sample is safe for you and your baby since this is a noninvasive test.

One genetic test for detecting Down syndrome is chronic villus sampling (CVS). This test involves removing a sample of chorionic villus, a kind of placental tissue. It shows your baby’s genetic information.

This test may be done as early as the 10th or 12th week of pregnancy. It may also disclose your baby’s sex since it contains gene information about him or her.

If you’re over 35 or have a family history of chromosomal abnormalities, your doctor may recommend CVS. This is a reliable test for determining the gender of a newborn, but it comes with certain dangers.

There is a risk of miscarriage and premature birth for certain women who have cramps, bleeding, or amniotic fluid leakage.

Amniocentesis is a technique used to diagnose and identify developmental problems in a developing fetus. A tiny quantity of amniotic fluid is collected by your doctor, which includes cells that suggest problems. Down syndrome, spina bifida, and other genetic disorders are all evaluated in the cells.

If an ultrasound reveals an anomaly, if you’ll be over 35 at the time of birth, or if you have a family history of chromosomal disorders, your healthcare practitioner may suggest an amniocentesis. This test is available between 15 and 18 weeks of pregnancy and takes approximately 30 minutes.

Your doctor orders an ultrasound to establish where your baby is in the womb, then withdraws amniotic fluid using a tiny needle inserted into your belly. Cramping, bruising, and spotting are all potential side effects. There’s also the possibility of miscarriage.

An amniocentesis not only detects birth defects and other anomalies in your baby but can also determine the gender of your baby. So, if you don’t want to know, let your doctor know before the test so he or she doesn’t tell anybody.

A common prenatal examination in which you lay down on a table and have your tummy scanned using ultrasonic waves is known as gender reveal ultrasound. This test creates a picture of your baby using sound waves, and it’s often used to monitor your baby’s growth and health.

An ultrasound may disclose your baby’s sex since it produces a picture of your baby. Most physicians arrange an ultrasound between 18 and 21 weeks, although ultrasonography may establish sex as early as 16 weeks.

However, it is not always 100 percent correct. Your baby may be in an unusual posture, making it difficult to view the genitals properly. Most people would think that if the sonographer can’t detect a penis then you’re pregnant with a girl, and vice versa. However, this gives way to errors, and thus the actual genitalia has to be visually confirmed before the gender can be announced.

Will Old Wives’ Tales Can Help Me To Determine The Gender Of My Baby At Home?

Some individuals even rely on old wives’ tales when it comes to predicting the gender of their baby. If you’re particularly hungry during pregnancy, you’re definitely expecting a boy, according to tradition. Extra testosterone produced by a newborn male is thought to enhance appetite.

While ancient wives’ tales may be entertaining when it comes to predicting a baby’s gender, there is no science or study to back up these beliefs or assertions. The only way to figure out what you’re dealing with is to see your doctor.

Can food aversion tell me the gender of my baby?

There are many old wives’ tales and myths on the internet regarding baby gender forecasts. Many people believe that looking at your food aversions may tell you whether you’re having a boy or a girl. Gender reveal myths and facts may be found in numerous parenting forums and websites.

If you’re having a baby and can’t wait to find out the gender, we can help!

Many expectant parents find gender determination to be one of the most anxiety-inducing moments in their pregnancies. However, in a classic medical setting, where your partner may not even be allowed in the room with you, does not take this anxiety into account, and oftentimes either fail to determine the gender or get it wrong.

Funny enough, sometimes parents will get a result back from their doctor’s ultrasound and it will be something like “It’s 50% a girl”. Well, by default it’s always a 50% chance of being either a girl or a boy, but somehow this is still acceptable as a gender determination.

We have done thousands of gender reveal scans, and have a 100% accuracy rate. In fact, if we can’t see the gender on your first visit, we will reschedule you free of charge to come back and try again!

We can help you find out if it’s a little girl or a little boy with our prenatal services that include ultrasounds at all stages in your pregnancy. If a gender reveals party is in your plans, we have many party items that could help you deliver the news to your friends and family with class, including smoke grenades, powder and confetti cannons, baseballs, and golf balls and gender reveal exploding cards.

Contact us for more information to see when it’s time to learn the gender of your baby during your pregnancy!

We hope that you found these tips helpful and are looking forward to your 3D ultrasound appointment. In the meantime, we will be happy to guide you as to when it is best to come for your private 3D ultrasound scan. Contact us to discuss!
If you would like more information about booking a 3D Ultrasound in 18 weeks or get answers to any questions related to this blog post topic please contact us.
BOOK YOUR 3D ULTRASOUND APPOINTMENT ONLINE

3D Ultrasound at 18 Weeks of Pregnancy