How to Cope With a Sinus Infection During Pregnancy

A sinus infection while pregnant can become a serious issue. This is how to learn whether you experience a sinus infection, and how to properly handle it to ensure you and your baby are safe.

While a sinus infection can be quite unpleasant by itself, when you get hit by it during pregnancy, it can leave you quite frustrated. A Date With Baby has created a comprehensive blog post about this topic which you may find quite informative and as well as interesting. 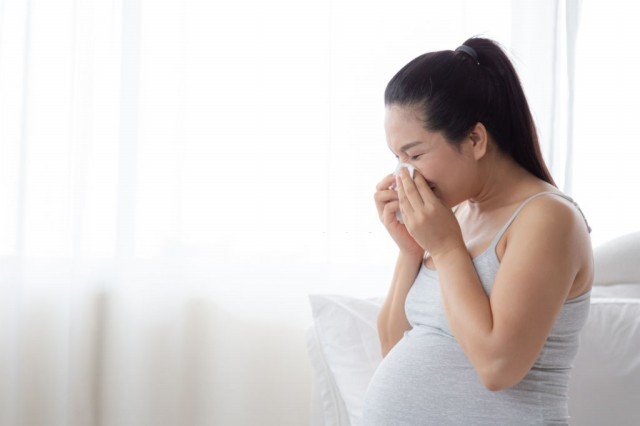 Additionally, you might be confused as to whether it is really an infection of the sinus or one of the signs of pregnancy. Furthermore, it’s not really clear if the standard methods of treatments are appropriate for unborn babies.

Therefore you need to get yourself educated, how to get over a sinus infection while being pregnant, and what causes the condition.

What Is Sinusitis in Pregnancy?

Sinusitis is the common name for sinus inflammation, which is actually an air-filled area around the nose. These pockets are lined with a membrane that generates mucus, which cleans it quickly in usual conditions.

However, once the sinuses are inflamed and bloated, the discharge slows down, allowing the fluid to pile up, which leaves you feeling like you’re having a terrible cold.

According to health professionals, while you could be more vulnerable to a sinus infection while pregnant, the disease is manifesting the same as it would be with anybody.

What Is The Cause Of A Sinus Infection While Pregnant?

Although the signs are the same no matter what the actual cause is, the reasons for the infection with the sinus during pregnancy (and any other time) can differ. The following causes may trigger the condition:

Viruses, allergens, and (in some cases) bacteria usually cause pain and infection, hampering discharge. Yet pregnancy itself can be a primary cause— due to a rise in estrogen and progesterone levels that can lead to swelling, doctors say.

If you had been susceptible to sinus infections before being pregnant, then you actually have a higher risk of developing an infection with the sinus once you are pregnant, compared to other individuals,

Signs Of A Sinus Infection During Pregnancy

When you are pregnant and in the past hadn’t had any experience with sinus infections, you might be wondering what makes you suffer.

If you note the following symptoms, odds are you have developed a sinus infection:

Health specialists say that if such signs continue with little relief for longer than a week or 10 days, it is likely a bacterial infection rather than a viral one. Under this scenario, antibiotics may need to be administered so make sure to let the doctor know if the symptoms are getting worse.

Sinus pressure and awful pain may leave you feeling pretty exhausted while pregnant but the infection does not impact your baby.

Sinus pressure and awful pain may leave you feeling pretty exhausted while pregnant but the infection does not impact your baby.

How to Treat a Sinus Infection When You Are Pregnant

Unless you have a bacterial infection, many sinus infections are generally viral, and taking antibiotics does usually not improve the condition.

Like for cold or flu in pregnancy, the safest options to alleviate the sinus are to treat the symptoms by using certain well-known home remedies, like:

Pregnancy rhinitis, also known as gestational rhinitis, is the phrase used to refer a runny or stuffy nose that pregnant women may encounter at any time of pregnancy. The condition typically starts in the second or third trimesters, though.

Pregnancy rhinitis generally lasts six weeks or a little more and has no cause of allergy or any other signs of a normal cold. Usually, the signs go away after two weeks of delivering the baby.

Certain essential oils that available on market, such as eucalyptus and peppermint oils, can help you to clear the airways and reduce congestion. Essential oils are one of the most common methods of natural therapy.

People are using them to ease inflammation symptoms in the sinus, unblock the irritating stuffed nose and facilitate sinus drainage. However, there is little research that can confirm the usage of essential oils to alleviate inflammation of the sinus.

There is some proof, however, that the essential oils may improve associated symptoms mentioned above, although a number of these studies have been conducted on animals or laboratory experiments, rather than on humans, which is due to an obvious reason.

Some findings show essential oils are capable of doing the following:

What Is Safe To Take For Sinus While Pregnant?

The good thing is there are many over-the-counter (OTC) medications that you can safely use during pregnancy.

For instance, acetaminophen (Tylenol) may help alleviate a sinus headache and sore throat. However, you need to ensure that you are taking the pain medication as instructed by your doctor.

While some other medical ingredients may also be deemed healthy for pregnant mothers, its wise to consult your doctor before taking these:

By limiting the blood flow around the nose, which decreases inflammation, decongestant sprays or medications can be used to relieve stuffiness and sinus pressure.

Pseudoephedrine and phenylephrine are marketed as Sudafed over-the-counter and are considered safe to use for pregnant women. Women who have experienced high blood pressure, though, should not use pseudoephedrine without first consulting with their doctor first. This is because the medicine can increase your blood pressure and can even lead to heartbeat jitter and race.