There is no one right answer to the question of what music to listen to while pregnant. Different types of music will work for different people, and it’s important to find what relaxes you and helps you feel comfortable during your pregnancy. However, some studies have shown that classical music may be beneficial for pregnant women and their unborn babies. If you’re interested in trying out classical music while pregnant, here are a few tips to get started. In this blog post A Date With Baby team will to answer the following questions: 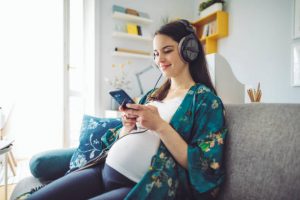 What music should i listen to while pregnant?

There are many different types of music that pregnant women can listen to, depending on their preference. Some women enjoy classical music, while others prefer more modern genres. Ultimately, it’s up to the pregnant woman to choose the type of music that makes her feel comfortable and relaxed.

That said, there are a few general recommendations that can be made when it comes to choosing music for pregnancy.

First and foremost, it’s important to choose music that is calming and relaxing. This can help to ease stress and anxiety, both of which can be detrimental to a pregnant woman’s health. Additionally, it’s a good idea to avoid loud or jarring music, as this can cause undue stress on the body.

Ultimately, the best way to determine what type of music is best for pregnancy is to experiment and find what works best for you. There is no one-size-fits-all answer when it comes to pregnancy music, so don’t be afraid to try out different genres and styles until you find the perfect fit.

When can babies hear music in the womb?

The ability to hear is essential for a baby’s development. Babies start to develop their hearing in the womb, and by the time they are born, they can hear quite well. Research has shown that babies can start to hear sounds from the outside world as early as 16 weeks gestation.

While at first these sounds may be muffled and difficult to distinguish, by the time a baby is full-term, they can usually hear quite well. In fact, studies have shown that newborns can react to loud noises with a startle reflex. So if you’re looking to give your baby a head start on their development, try talking or singing to them while they’re still in the womb!

Studies have shown that babies can start hearing music in the womb as early as 20 weeks gestation. In one study, fetal heartbeat monitors were used to track the heart rates of fetuses while they were exposed to various types of music.

The results showed that classical music caused the fetal heart rate to slow down, while rock music caused it to speed up. This suggests that babies are able to distinguish between different types of music and respond accordingly. Moreover, these effects were seen at relatively low volumes, suggesting that babies don’t need to be blasted with music in order to hear it. So if you’re looking for a way to bond with your baby before they’re born, consider putting on some tunes and letting them enjoy the sound.

What kind of music is good for baby in womb?

While there is no clear consensus on what type of music is best for babies in the womb, many experts believe that classical music can be beneficial.

One theory is that the simple, repetitive melodies of classical music can help to soothe and calm the developing baby.

Furthermore, the structures and patterns of classical music can help to promote brain development.

Additionally, research has shown that babies who were exposed to classical music in utero are more likely to display an interest in music later in life. While there is no guarantee that playing classical music for your baby will make them a prodigy, it may help to promote a love of music and healthy brain development.

What are the effects of playing music to a fetus?

To determine the impact of music on developing fetuses, medical professionals have conducted several research studies on pregnant women. Based on the findings, compared to babies who were not subjected to any music while they were in the womb, unborn babies who were introduced to music showed a substantial improvement in their general mental, cognitive, psychomotor, sensory, psychological, and emotional development.

To determine the effect of Indian classical music, particularly the Kalyani raga, on expectant mothers, a research study was conducted. The ladies were instructed to listen to Kalyani raga-style Karnatic music for the duration of the study, which lasted 20 days.

Does playing classical music while pregnant make your baby smarter?

There is no proof to support this. Research has indicated that listening to a waltz or symphony may aid improve brain development, particularly in preterm newborns. It has also been demonstrated that classical music lowers a newborn’s heartbeat and respiration rates and reduces their tension. However, is it possible that classical music may make newborns smarter? That is very questionable.

The “Mozart effect” proposes that exposure to classical music makes children smarter. It derives from a 1993 experiment conducted by psychologist Francis Rauscher, who discovered that college students momentarily performed better on spatial thinking exams after listening to a Mozart sonata.

The research wasn’t what the media reported on; it was misinterpreted to indicate that classical music generally increases children’s intelligence. Only a little improvement in spatial ability was shown in the students, and the benefits vanished quickly. But music has advantages as well. It may benefit growing brains in good ways.

Why does my baby kick when I listen to music?

There’s no clear answer as to why babies kick when they hear music, but there are a few possible explanations. It could be that the music is stimulating their nervous system, causing them to move in response. It’s also possible that they’re trying to create a beat or rhythm by kicking in time with the music.

Some experts believe that babies may also be expressing their joy or excitement when they hear music that they enjoy.

Whatever the reason, it’s clear that music has a powerful effect on babies and can cause them to move in ways that they wouldn’t otherwise. So if you notice your baby kicking when you listen to music, don’t be alarmed – it’s just their way of responding to the sound.

Watch the video below if you would like to learn more about the effects of music on babies:

When do you get your first ultrasound for pregnancy in Ontario?

When you are pregnant, there are a lot of things to think about and keep

How to get rid of hiccups while pregnant?

Do you have hiccups? If so, you’re not alone. Hiccups are a common occurrence, and