How To Prevent Pregnancy Hair Loss?

Despite what many might think, pregnancy hair loss is actually a normal part of life. In fact, both men and women lose as much as 100 hairs a day. It has been shown that while 90% of your hair is in the growth stage, the remaining 10% is in the resting stage at any given time. Every once in a while some of the hair falls out and allows for new hair growth in its place.

During pregnancy, a number of things can cause a more aggressive hair loss in women. The condition of excessively losing hair is called telogen effluvium.

In a lot of cases, increased estrogen levels during pregnancy can cause the hair to become thicker and stronger, giving it more of a shine than before. In other cases, pregnancy has the opposite effect. Both are quite normal occurrences, however. Let’s see a date with baby’s guide on how to deal with pregnancy hair loss. 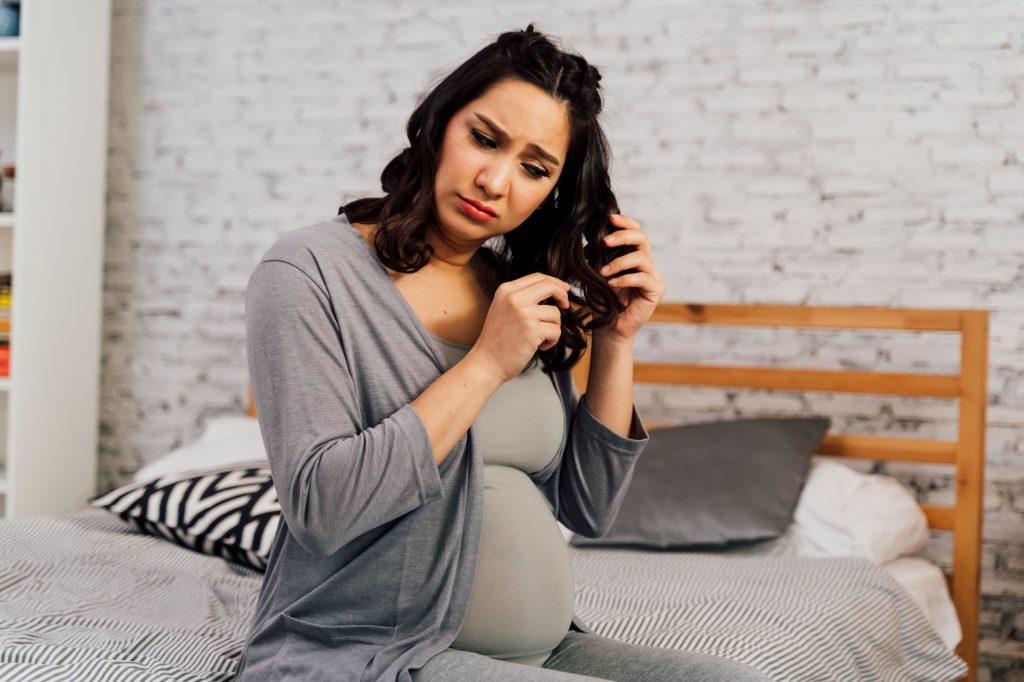 Does Pregnancy Cause Hair Loss?

Hair loss during pregnancy (also called alopecia pregnancy) can be caused by a variety of factors, not the least of which are stress, hormonal changes, as well as certain health conditions.

Hair loss occurs due to the hair follicles being put through the resting phase for longer periods thereby shedding the hair.

Pregnancy is a major event in a woman’s life that will lead your body to undergo an initial shock. Hair loss in early pregnancy is not uncommon, as is hair thinning. The body will diverge most of its hormonal resources to support the developing fetus, and some of the bodily functions will be affected. This can lead to a major increase in hair loss in the first trimester, in some cases by as much as 30%.

Hair loss in the first trimester is not uncommon, with many cases taking place a few months into the pregnancy and things will return to normal soon after delivery. It is worth noting that this is not a permanent or even long-lasting phenomenon, and hair loss during pregnancy will not lead to boldness.

Some of the health conditions that can cause alopecia in pregnancy are iron deficiency and thyroid issues.

Iron deficiency is a result of not enough or dysfunctional red blood cells in the blood. This can lead to poor oxygenation of the body’s organs. Signs of iron deficiency is hair thinning, fatigue, headaches, irregular heartbeat, and getting short of breath during stress or exercise.

Thyroid problems can manifest in two different ways: hyperthyroidism (where the thyroid gland is too active, producing too much hormone) and hypothyroidism (where it is not active enough). Of the two, hypothyroidism is more prevalent in pregnancies, affecting about 2-3 % of all pregnant women. Symptoms include constipation, exhaustion, hair loss, weight gain, and muscle cramps.

Other causes unrelated to pregnancy:

While losing hair during pregnancy can be all part of the normal pregnancy experience, it is usually just accompanied by thinning of the hair. However, if you observe patchy hair loss, or bald spots during pregnancy or not, there may be other issues that should be considered and paid careful attention to. These can be genetic conditions or auto-immune disorders as described below.

Androgenic Alopecia is a condition in which the growth stage of the hair follicles is shortened, and the time between shedding the hair and growing new ones is extended.

Alopecia Areata is a condition usually accompanied by the patchy hair loss on the head and other parts of the body and irregular and spontaneous hair growth.

Traction Alopecia is a form of hair loss that occurs as a result of certain trauma. This can be anything from a very tight hairstyle to an abnormal treatment of hair. Sometimes this can result in permanent hair damage and loss.

Losing A Lot Of Hair After Pregnancy

It is very common to have hair loss after giving birth. As mentioned at the beginning of this article, the rising estrogen levels contribute to the hair becoming shinier and better looking, inhibiting hair loss in many cases. If hair loss didn’t occur during pregnancy, you can expect it to occur as the estrogen levels fall sharply and the hair loss inhibition reduces.

As the hair growth stabilizes, you should see hair loss return to your normal levels by 3-4 months postpartum.

When Does Hair Stop Falling Out During Pregnancy?

The hair that was in the growth stage will enter the resting stage and cause hair loss after delivery. Hair loss should stabilize after about 3-4 months of pregnancy as your estrogen levels fall back to normal levels and the hair growth cycle normalizes.