Can you eat cream cheese when pregnant?

In short, yes. Cream cheese is produced from pasteurized milk, and therefore it is safe to consume while pregnant.

Soft cheeses manufactured from raw milk, or those that have not been pasteurized, should be avoided during pregnancy (eg. Brie, camembert, etc.). This is mainly due to the bacteria called Listeria, which can be found in them and contaminate food. 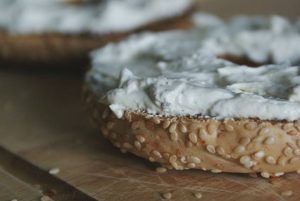 Cream cheese may be used in a variety of ways, from making icing for a red velvet cake to spreading it over a bagel for breakfast. When it comes to cravings, if you’re pregnant, you may find this sweet or salty pleasure even more attractive. However, you may have heard that soft cheeses should be avoided when pregnant.

Obviously, this raises the question of whether or not eating cream cheese while pregnant is a good idea. Most of the time, the answer is “yes” with a few considerations.

What is cream cheese?

Pregnant women have been advised to avoid soft cheeses like Brie, Camembert, chèvre, and so forth, but cream cheese isn’t one of them. Because it’s a spread, it’s soft, but that’s OK.

The most common ingredient in cream cheese is cream, although it may also be prepared using a combination of cream and milk. In order to remove pathogens (“bad” bacteria), the cream and milk are pasteurized, which means they are safe to consume. After that, it’s curdled, generally with the addition of “healthy” lactic acid bacteria. When the curds are heated, they are thickened with stabilizers to get the smooth texture of cream cheese.

Why is cream cheese typically considered safe to consume while pregnant?

Pasteurization of the cream is the most important step in making cream cheese safe for pregnant women to eat. As we previously said, the heating procedure eliminates hazardous bacteria from the food. People with lower immune systems such as babies, the elderly, and pregnant women are all at risk from listeria bacteria. Pregnant women can eat cream cheese since it is safe to do so.

There are several exceptions to the principle

In general, you should not find an unpasteurized version of store-bought cream cheese in the market. However, it’s plausible to think that such a product does exist. Making your own cream cheese from raw cream may also be an option.

In addition, there are cream cheese-like items that may be made with raw milk in different countries. Unpasteurized milk may be used to make Neufchâtel cheese, which comes from France.

Therefore, when you’re pregnant, never eat cream cheese prepared from unpasteurized milk or cream. You and your unborn baby can be at significant risk of listeriosis, an illness caused by the Listeria monocytogenes bacteria.

Remember to keep an eye on the expiry date

The shelf life of cream cheese, on the other hand, is not very great. As a result, keep an eye out for the expiry date and eat it within two weeks after opening it.

Spreading the cheese with your spreading knife and returning for more is a certain way to introduce microbial contamination and speed up the spoilage process.

It’s no surprise that cream cheese has a lot of fat. One ounce of the popular Kraft Philadelphia cream cheese comprises 10 grammes of fat, six of which are saturated. A staggering 29% of the daily recommended intake of saturated fat is included in one serving.

When you’re pregnant, fat isn’t a bad thing – in fact, it’s a necessity! However, pregnancy issues such as gestational diabetes might arise if you abuse it.

Treat yourself to a little cream cheese once in a while. It’s also possible to get whipped variants that have the same fantastic flavour but less fat.

Cream cheese is a cheese spread prepared with pasteurized dairy, unlike some soft cheeses. As a result, it is safe to take while pregnant. However, whether pregnant or not, always pay close attention to expiry dates and components when picking what to eat.

It’s preferable to eat a nutritional diet rich in whole vegetables, fruits, and healthy fat and protein choices at all stages of life, especially during pregnancy. A little cream cheese on a toasted bagel, on the other hand, may go a long way toward fulfilling a need — so dig in, knowing that it’s completely healthy for you and your baby.

Can I have Philadelphia cream cheese when pregnant?

Yes. Cream cheese, has a significant amount of fat, as do many other kinds of cheese and cheese spreads. A staggering 29 percent of the recommended daily amount of saturated fat is included within this amount.

Is all cream cheese pasteurized?

Pasteurization is used in the manufacturing of all cream cheese products. The cream cheese you purchase at the store will almost definitely be prepared from pasteurized milk unless otherwise stated.

Can I eat Tesco soft cheese when pregnant?

Pregnant women should avoid eating soft blue cheese until it has been cooked. Listeria may thrive in soft cheeses because they are less acidic and have a higher moisture content, making them perfect breeding grounds for the microorganism.