Can you eat blue cheese while pregnant?

Blue cheese, often known as “bleu cheese,” is distinguished by its blueish tint and strong aroma and flavor. This delicious dairy product is frequently seen in salad dressings and sauces, as well as accompanying fruit and nuts or other cheeses. But can you eat blue cheese while pregnant? In the following blog article, we will address this question. 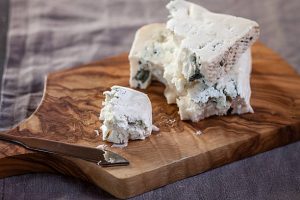 What is blue cheese?

Blue cheese is a type of aged cheese prepared from the milk of cows, goats, or sheep. The cheese has a salty, bitter, and pungent flavour that is known for its characteristic spots. This sort of cheese is low in calories but high in sodium, so people who are trying to keep their blood pressure under control should avoid it.

While the consumption of some mould in foods may be harmful, this is not true of all moulds. Both mycotoxins and aflatoxins, which are often produced by moulds, are absent from cheese. This means that they are safe to consume, and the spotted texture in blue cheese is only a result of the fermentation process.

In most cases, the milk used to make blue cheese is pasteurized. Cheesemakers utilize the Penicillium mould cultures to enhance the flavour and texture of the cheese and to give it its spotty appearance.

Today, some believe that the origin of blue cheese, as well as other mouldy chees, can be traced back to people forgetting, or leaving their cheese in a place for some other reason, only to find it moulded when it was rediscovered. Perhaps, due to scarcity of products at the time, people still chose to it the mouldy cheese, and over the years blue cheese graduated from a mistake to a delicacy.

Can you eat blue cheese while pregnant?

Exposure to these bacteria might result in the illness of listeriosis. As a result, the mother is more susceptible to illness and other infections as her immune system weakens. Another possible adverse effect of Listeriosis is abnormal child development after delivery, which is something you don’t want to happen to your baby. Cooked blue cheese, on the other hand, is safer for pregnant women to eat.

So, when you have a question about whether you can eat food that has touched blue cheese while pregnant, the short answer is no.

Which blue cheese is safe in pregnancy?

As mentioned above, the safety of blue cheese during pregnancy is based on its pasteurization condition, but also on a few other things, like texture. Some of the cheese is soft (containing more water) and others are hard. Hard blue cheese is safe to eat during pregnancy if it is prepared with pasteurized milk since it has a considerably reduced risk of containing listeria.

Is gorgonzola a pasteurized blue cheese?

Some sources state that gorgonzola blue cheese may sometimes be an exception. They are often prepared in a wet environment, which gives them a particular look. However, it’s safe to consume on pizza, since heat kills all hazardous germs during the cooking process.

However, in general, it is recommended that the following cheeses be avoided completely while pregnant to prevent listeriosis infection:

Can you eat blue cheese dressing while pregnant?

To be on the safe side, you may want to avoid consuming blue cheese dressing as an expectant mother. However, if you still insist on buying some you should prefer products that are made from pasteurized milk.

Although there are some other variations in the market, mayonnaise, buttermilk, sour cream, vinegar, milk, onion, and garlic powder are often combined with blue cheese to make dressings. The milk and blue cheese in this dressing may be at risk of Listeria contamination. Please keep in mind that blue cheese dressing may be prepared with or without pasteurized ingredients.

Can you eat blue cheese crumbles while pregnant?

If prepared from pasteurized milk, blue cheese crumbles (commonly known as ‘Bleu Cheese’) are safe. For instance, the variety that comes in tubs is used as a salad dressing. If they’re produced from hard cheese rather than soft cheese, they’re safe.

Can you eat pasteurized blue cheese while pregnant?

In general, all pasteurized milk cheeses are safe to consume during pregnancy. However, please note that blue cheese is mostly prepared with unpasteurized milk, which raises your risk of Listeria contamination, which is particularly harmful to unborn babies.

That’s pretty much all there is to know about blue cheese. To summarize, if it’s soft, cook it and eat it. If it’s hard, just eat it straight away and nothing will happen. If you find yourself reaching for soft cheeses frequently, be sure they’re manufactured with pasteurized milk. Pasteurization eliminates microorganisms, making the food completely safe for your baby.