In today’s post, we take a look at the anecdotal claim that a pedicure can induce labour. While there isn’t much scientific evidence to support this claim, there are some things to keep in mind if you’re looking to try anything to induce labour. We explore the possible benefits and risks of getting a pedicure during pregnancy and give you all the information you need to make an informed decision. 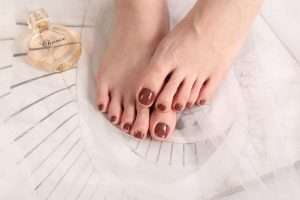 Can a pedicure induce labor?

There is no scientific proof to back up the belief that having a pedicure might cause labour. Some women, nevertheless, feel that the pressure and massage used to the feet and lower legs during a pedicure might help to induce contractions. Although there is no hard evidence that this approach works, several women swear by it!

When a pregnancy approaches 37 weeks, several issues with swollen feet may arise. Foot massage (stimulation via pedicure) is the most suggested treatment for reducing pain, stress, and swelling.

It may include reflexology, which involves pressing certain spots on moms’ ankles, not actually feet. Massages will stimulate the uterus, ovaries, and maybe the fallopian tubes.

In certain online pregnancy discussion forums, mothers report having a light contraction that progresses to typical labour after many pedicure treatments (Pedicures between 36-39 weeks or third trimester).

Women who go into labour soon after receiving a pedicure while pregnant are unable to explain the cause of their contractions.

Despite the fact that there is no decent explanation or study on a pedicure to trigger labour, the pedicure is likely to be beneficial for parents who want to go into natural labour. This massage is worthwhile to try since it also helps in relaxing.

Are pedicures safe during pregnancy?

Pedicures are generally safe during pregnancy. There are a few things to consider if you are pregnant.

Although there is no concrete evidence that a pedicure will induce labour, it can’t hurt to give it a try. If you’re at the end of your pregnancy and looking for ways to get things started, schedule an appointment for a pedicure and see if you feel any different afterward.

Feel free to check out our blog posts for more information about pregnancy tips and tricks. We hope these tips have helped you stay comfortable and informed during your pregnancy.